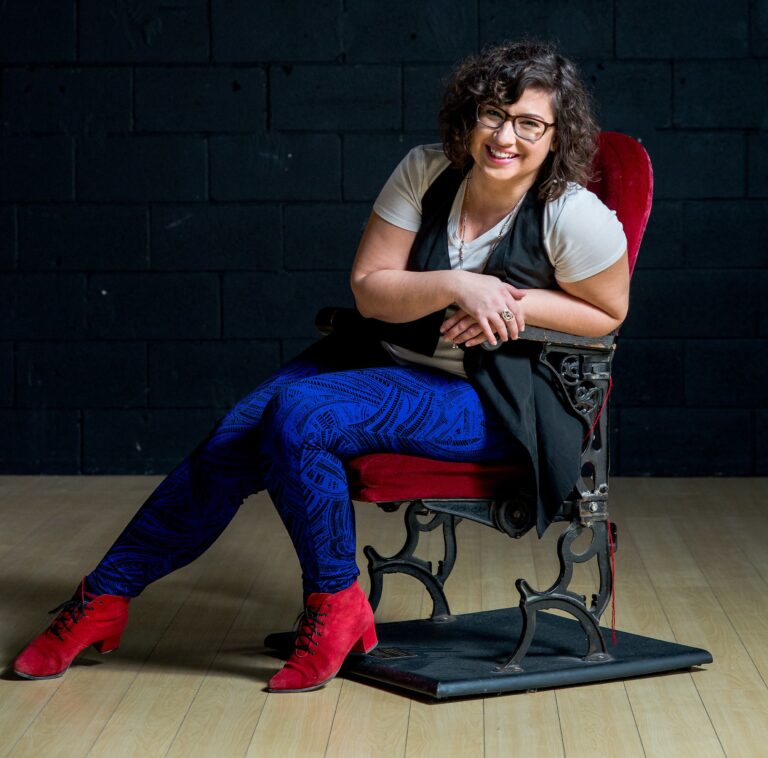 Sarah Magni (She/her) is a theatre artist, creator, writer, director, community arts facilitator, educator and researcher. Her work is grounded in theatre as act of social justice, decolonial theatre and what she calls “radical accessibility.”

Sarah has spent the majority of her life on the stage and has an extensive background in all types of performing arts. Sarah studied classical music with top vocal coaches and competed and flourished in vocal competitions from a young age. She has performed with the Toronto Philharmonic Orchestra. She later shifted gears and went on to study Musical Theatre in New York City at the American Musical and Dramatic Academy and The New School University (BFA Musical Theatre). Additionally, She studied and performed improv at the acclaimed Upright Citizen’s Brigade in NYC.

In New York City she performed in an Off-Off Broadway sketch comedy show and a tour with the Theatre Rehabilitation for Youth. She was a main puppeteer and performer in a number of NYC’s Shadow Box Theatre’s productions.

Sarah’s exploration of the arts led her to pen her one woman show, Stamped: A Story About Daniel, who Happens to have Autism that premiered at the Toronto Fringe Festival July 2012 and received rave reviews. From there, Sarah’s solo show was later performed for nursing students at Ryerson University and for the Autism Ontario National Conference. Sarah’s show had a run at the legendary Kraine Theatre in New York City. Sarah was a resident performer, singer and puppeteer with the world renowned Famous PEOPLE Players.

As an educator Sarah has been working with youth performers and performers with disabilities for over 10 years. As a facilitator she has run numerous workshops and been on panels at Universities and theatre institutions such as McGill University, York University, Young People’s Theatre, Temple University in Philadelphia and City College New York, focusing theatre and disability.

Aside from theatre, Hayden can be heard as Nikola Tesla and Z3 in Super Science Friends (an animation by Tinman Creative Studios), as Gorthion in Bakugan: Battle Planet (Spin Master), and as Captain Seasalt in Captain Seasalt and the ABC Pirates (Skyship Entertainment). 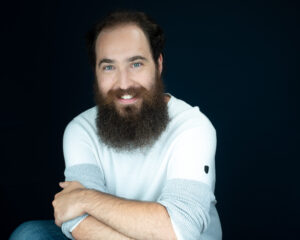 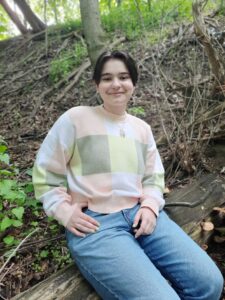 Dante Amo (he/they) is  a queer and trans upcoming singer, actor, and playwright. Currently living in Vaughan, Ontario. Their first written play includes “The Prince of Grey Island” that they also acted, wrote, directed, and edited. “The Prince of Grey Island” had a revival in 2022 at Shadowpath Theatre Company’s queer arts festival “Stories of the Alphabet Community” and was performed by professional actors. Dante is currently working on his first novel “Becoming:  Flynn,” inspired by his own transition journey. They are pursuing the arts in their future. They have been taking vocal lessons, and have goals and aspirations to become a Musical Theatre actor. 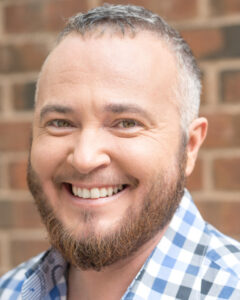 Hanlon McGregor is a queer, transgender, and mad-identified theatre artist and filmmaker based in Tkaronto/Toronto with strong ties to his native Nova Scotia; he owns Hanlon’s Point Productions and is a founding member and writer/director/performer at Under the Bus Productions.

Hanlon’s plays, Unexpectedly Trans (co-written by Mihaly Szabados) and Bubble Trans Pride (co-written by Syrus Marcus Ware), have been performed at Halifax Fringe and the Rhubarb Festival. His short films include Holding Hands with the Awkward, Hamlet Moment, and The Change music video for Rich Aucoin; they were (and are still) being shown at Halifax Fringe and were official selections at the Toronto Short Film Festival, Bi+ Arts Festival, and the 519 Community Centre’s Trans Film Festival.

Robert (They/Them) is an Ontario based Music Director, Composer/Lyricist, Orchestrator and Arts Educator. A graduate of The Randolph College for the Performing Arts and The Royal Conservatoire of Scotlands Master’s in Musical Theatre: Music Direction, Robert has worked across Canada, New York City, Scotland, England, Germany, Poland and India. Robert possess a unique view of the world of vocal pedagogy having had the chance to explore this practice across the globe and with their own Trans/Non-Binary identity in mind. This passions allows Robert to lead voice work for Trans/NB singers from a place of questioning and discovery as they gain more and more expertise in working with this community. 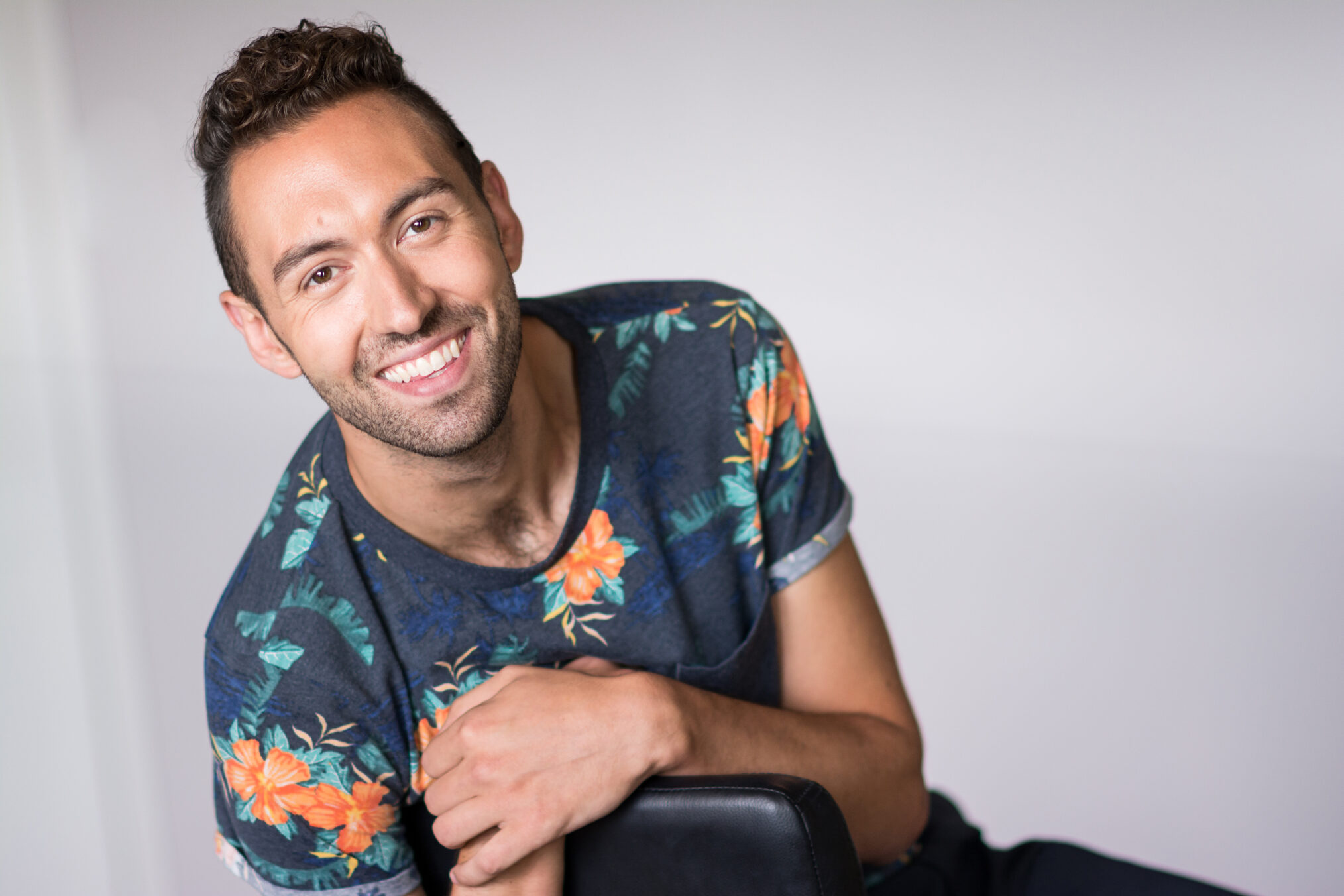 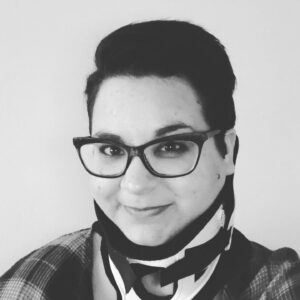 Ophira Calof (She/They) is a multi award winning Disabled writer, performer, and producer. Her work weaves together music, comedy, and storytelling, centering disability and chronic illness experience. They co-created the sketch comedy revue Generally Hospital and her solo show, Literally Titanium premiered at the 2020 Next Stage Theatre Festival.  Ophira also works as a curator, educator, consultant, and keynote speaker with projects including COVID-19 through a Disability Lens: Storytelling and Filmmaking Project, Myseum Toronto’s Making Space: Stories of Disabled Youth in the GTA, and Bad Dog Theatre’s 5th annual Our Cities On Our Stages Symposium.

Yvonne holds a BFA with Honours in Dance from York University and is a graduate from Professional Training Program at the School of the Toronto Dance Theatre. When Yvonne shifted careers to teaching and choreographing, she also shifted to teaching adapted dance classes and continues to take workshops and courses to learn more about movement and health. Yvonne completed the Advanced workshop with Dance for Parkinson’s, obtained Rhythm Works Integrated Dance Instructor Certification and studied Brain Compatible Dance Education with Anne Green Gilbert.  She recently completed the Personal Training Specialist course with CANFITPRO and the Fitness Training Specialist certification.  In 2019, Yvonne received a grant to co-write, direct and choreograph a theatre piece with CHIRS (Community Head Injury Resource Services) to share personal stories of people who have ABI.  Performing highlights include over 15 years with Famous PEOPLE Players, touring nationally and internationally, performing as a Highland and modern dancer and as an aerialist with Gravityworks.
Yvonne firmly believes that we should all dance because it helps us live better in our bodies, regardless of challenges we are facing.  There is always something for us to dance about! 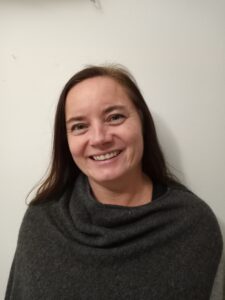 Mentors & Facilitators for "3 Plays In 30 Days" and more 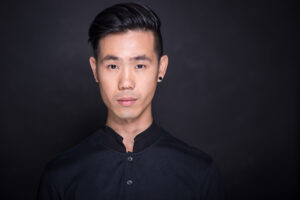 Jeff is a theatre artist, originally from Hong Kong. He debuted his (now published) first play, trace, as part of Factory Theatre’s 2017/2018 season, in association with b current, directed by Nina Lee Aquino as well as performing as Ophelia in Why Not Theatre’s Dora-Nominated Prince Hamlet directed by Ravi Jain. Select Acting credits include: Hana’s Suitcase (Tour: Toronto/Montreal/Seattle/YPT), Unknown Soldier (lemontree/Architect Theatre), Murderers Confess at Christmastime (OutsideTheMarch), Taming of the Shrew, Romeo and Juliet (Repercussion Theatre), The Handmaid’s Tale (Hulu), Incorporated (SyFy/CBS), Orphan Black (BBC America).
As a playwright, Jeff is currently obsessed with adaptations of western classics: a new version of Antigone with Young People’s Theatre and an exploration of interlingualism in Shakespeare’s canon with Repercussion Theatre and Playwrights Workshop Montreal. He has held residencies with the Stratford Playwright’s Retreat 2016, Nightswimming, Cahoots Hot House Unit, The Banff Playwrights Lab, and Factory Theatre. Jeff received a Harold Award 2017 (“harolded” by Brian Quirt into the House of Nadia Ross!) last year for his mentorship and community work in the theatre. Jeff is a graduate of the National Theatre School.

Alicia juggles her time between her three loves: acting, playwrighting, and voice coaching. As a playwright, she wants to celebrate and complicate the narratives of blackness. She is determined to bring much-needed laughter and empowerment to her people. Recent works include: How to Be Black (one-woman show: York University’s Graduate Acting Program) Articulation (social satire: Obsidian Theatre Company’s playwrighting unit), Sweeter(TYA play: Cahoots Theatre Company’s HOT HOUSE Creator’s unit). Upcoming: she will draft her next piece, Solve For X, as the Playwright-In-Residence of The Driftwood Theatre Group. Her current project Sweeter will have a workshop and staged reading in February 2019. 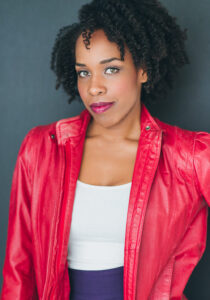 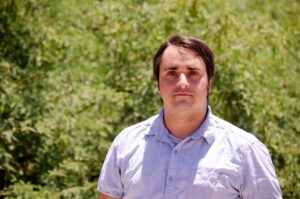 Dave is a neurodivergent playwright and dramaturg. His plays have been published and produced in New York City, LA and across the U.S. He is currently pursuing his MFA in Dramatic Writing from Arizona State University.

Made with ❤ by Melody Concept

It means the world to us!